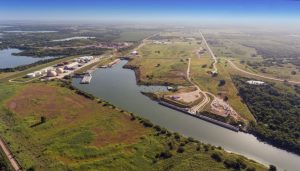 The Port of Victoria (POV) was created to formally organize the management of the ports and waterways of the Victoria County Navigation District, which encompasses the entire county of Victoria. Navigation districts are enabled with the power to enhance the navigable waterways within their jurisdiction.

A major savings was realized by completing the basin expansion, along with the widening and deepening of the Canal simultaneously. In addition to almost doubling the size of the harbor, a 400-foot x 150-foot barge slip was added. These enhancements offer customers greater safety and efficiency.

The Port has recently created an Industrial Park with multi-modal access. The Texas Logistics Center is located within a Foreign Trade Zone and a Texas Enterprise Zone. The Port has the ability to “build to suit” and tailor a package specific to the facility and transportation needs of a business.

Formation of the Interstate Inland Waterway League of Louisiana and the Texas Canal Association. Construction of Gulf Intracoastal Waterway begins.

U. S. Congress passes a bill authorizing a special survey for the canal. The U. S. Army Corps of Engineers recommends the canal be constructed between New Orleans and Corpus Christi.

First portion of the GIWW is complete – between Sabine River and New Orleans , LA.

The War Years. WWII reveals the importance of inland, protected water transportation to the Nation’s defense.

The original construction of the channel authorized by the Rivers and Harbors Act of 1945.

Voters in Victoria County approve a $500,000 Bond Issue to share the cost to build the barge canal.

Formal completion of the Waterway. Victorian J. M. Pickering cut the ribbon for the opening of the section of the GIWW between Corpus Christi and Brownsville.

Construction of the Barge Canal to Victoria begins.

The first 14-mile leg of the Canal to Victoria is completed. Opening ceremony held at the Union Carbide docks.

Petition to widen and deepen the Canal.

Water Resources Development Act of 1988 authorizes the widening and deepening of the Victoria Barge Canal.

Construction begins to widen and deepen the Channel to Victoria with the awarding of the first construction contract in September.