As nationwide exports increase over time, the United States must prepare to meet the pending growth.

And the Crossroads is no exception.

Victoria is among 40 metropolitan areas nationwide expected to see a 70 percent or more increase in exports in the coming decade, according to a United States Conference of Mayors study released Friday.

Victoria exports rang in at $1.5 billion in 2010, according to the report, and the industry is expected to see 79.5 percent growth through 2020.

Nationwide exports will comprise almost 40 percent of the nation’s real gross domestic product through the next decade, according to the report. That’s up from the 26.5 percent of the market they claimed the previous decade.

Such jumps could open flood gates to more jobs nationwide, Alvin Brown, chairman of the conference of mayors’ Metro Exports and Ports Taskforce, said in an organization news release.

“In an increasingly globalized economy, it is vital that the U.S. is able to take advantage of the economic opportunities opening up around the world,” said Brown, who is also mayor of Jacksonville, Fla. “To do so, we must get moving on improving and expanding our roads and railways and modernizing our ports, all of which are in need of immediate attention.”

Export increases are good news for any area because they mean growth in both jobs and in the community’s overall well-being, said Dale Fowler, president of the Victoria Economic Development Corp.

While much of the area’s export growth will consist of Caterpillar products, he said the petrochemical industry continues to prosper and will make up its fair share of regional exports.

As far as preparedness goes, Fowler said Victoria’s leadership has taken a proactive approach to the future and the infrastructure needs that accompany it. Those include overpasses going in on Loop 463, he said, and ongoing improvements at the Port of Victoria.

Proposed updates at the local port and barge canal include improved rail service, a new container dock and a fleeting operation, something akin to a large parking lot for the barges, Robert Loeb, chairman of the Victoria County Navigation District, said at a Tuesday morning Victoria Partnership meeting.

“We’re moving forward,” he said of the plans. 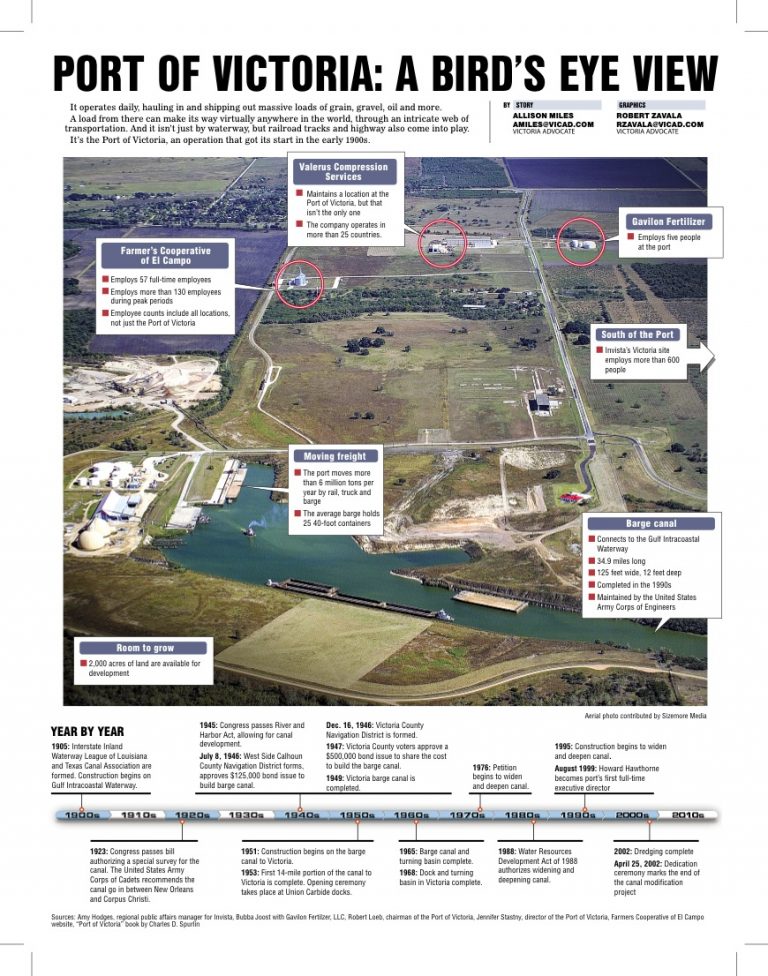 Jun 25 2011
It operates daily, hauling in and shipping out massive loads of grain, gravel, oil and more. A load from there can make its way virtually anywhere in the world, through an intricate web of transportation. And it isn’t just by waterway – railroad lines and highway also come into play. It’s th...Continue Reading

Jun 24 2011
[image: missing] The key word when discussing intermodal transportation is options. In terms of transportation, intermodal describes an area with multiple options for importing and exporting goods. The Port of Victoria, which accommodates rail, barge and trucks, is one example. With that in mind, which mode of transportation do companies use when receivin...Continue Reading
Add to Report View Custom Report
Lorem ipsum dolor sit amet, consectetur adipiscing elit. Praesent ut sapien lorem. Nulla facilisi.